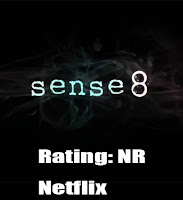 Just finished "Sense8" on Netflix......There weren't any huge twists at the end, or really, throughout. It defies description, spoiling, etc. To (imperfectly) quote another line from a Wachowski flick you may have seen, "nobody can tell you what it is, you have to see it for yourself".

I can't promise that it will touch everyone the way it did me, but I think everyone should see it. It takes the kind of risks that the Wachowskis probably weren't allowed to take with Jupiter Ascending, and the end result is so much better off for it.

This isn't a story that could be told anywhere else in a visual medium. That's not hyperbole, it's a fact. There are things that are graphic, because in life, there are things that are graphic. It really pulls the curtain back on society, and stands there by your side, forcing you to either accept it or not. There are many people that will not, borne out of prejudice, preference. or simply naivety. There is no way that a film studio would take this risk, some bean counter would come along and put a stop to it, saying that there is no market for something like this. TV? Yeah, watch it and tell me which network would want to test the censors with something this risky.

Oh, how many things the closed minded will have
to hate in this. There is homosexuality, one of the cast is transgendered, and there are no two of the eight that are similar. The cast is diverse, and by their own admission, not all of them are good people. They are alternatively cowards, murderers, thieves, liars, cheats.....but there is also no shortage of good qualities as well. They are also strong, loving, accepting, powerful, and brave. They're all very real characters, each with strengths and weaknesses just like you or I.

Those strengths and weaknesses are where the show makes its mark. Once the group has reached out to one another (though not entirely by choice) they realize that what they are is not as important as who they are. Sense8 is really at it's best when the characters involved are drawing from the connections between them. When one of them is in a physical confrontation, but has only ever pretended to fight on television, the German mob member steps in, taking control of their body to help out. When someone needs to provide a softer form of persuasion, that same telenovella actor returns the favor.

It shows how relationships are really just relationships, and how it doesn't matter who you love, the matter is that you love someone that loves you back. When one of the members of the group are struggling with a difficult moral dilemma, loss, or tragedy, another member that is going through (or has in the past) something similar is there to listen. I found myself wishing to be a part of something like this group, if only for the connection to others that we seem to have either lost, or to never have had.

In the show, that connection knows no geographic bounds. A member spends a great portion of the series in prison, and is still no further disconnected from the group than the woman in India, or the cop in Chicago. It's much the same way I imagine we will meet in augmented reality in the future (aside from the transference of skills).

Sometimes, it's enough to just have someone sit beside you, without touching. Just to know they are there, to help us all combat the loneliness that we all feel from time to time.

If there is anything that this show is about, it is that we are all more connected than we know. We might be different, come from different places, eat different foods, love different kinds of people, but we're all looking for the same things out of life, and together, if we stop hating each other for being different and just listen for a few minutes, maybe we can all help each other get what we are after.

Like I said above, I think everyone should watch this, but I'm also saying that knowing that a fair number of you will not like it. The ones that don't will have their reasons why, and the reasons why will tell them a lot about who they are. I'm not saying that anyone that doesn't like this is a homophobe or racist or anything, some people just won't care for the plot or the cinematography. I'm not here to call anyone anything, and furthermore, I don't have to. Those of you capable of acceptance and appreciation will do so, and those of you that can't...won't. This series will certainly draw out whatever qualities are in you, and at that point, it will be up to you to decide if you accept that about yourself, or if you wish to try to do better. For those that are willing to push past their discomfort at some of the subject matter to finish the series, I think that you will find the beauty in it.

It's important to occasionally endure things outside of ones comfort zone, to make us better people, or at least to give us a broader range of experiences to draw from. This show definitely pushes the comfort zone, but I think it does so in meaningful ways.

The vast amount of character work done in this first season will leave you feeling like you know these characters, even at the sacrifice of there not being a large over-arching plot for them to struggle against. There is certainly an antagonist, but he is presented in the first episode and not heard from until near the end. There could have been more heard from him. So it's not a perfect series, but as I say above, it takes meaningful chances, and is definitely worth a watch.
Opinion Reviews (other)