Making a Mountain out of a Memorial

February 01, 2015
This post will probably be polarizing for some to read, but I think if you stick with it to the end, we might find ourselves on common ground. 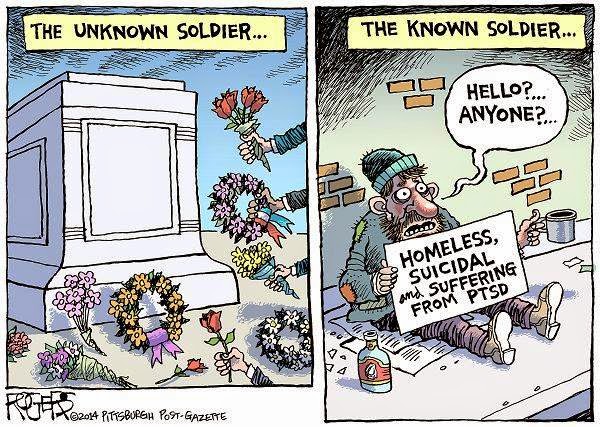 I love this comic, because it speaks to something that I've thought for a while, but had a hard time putting into words. Across from my apartment, there used to be a gazebo. It was a cute little thing, and it was nice to look out at it from my window. A few months back, they removed it, and re-landscaped the ground it sat on.

For a while, I had heard rumors that they were going to remodel the gazebo in a shop and bring it back, which would have been fine. Things need to be renewed every once in a while, and that is understandable.

But later, where the gazebo once stood, a sign was erected with a fundraising "thermometer" on it, charting the progress of a fundraising effort to pay for a new veterans memorial, and I had strong, conflicting emotions about that.

I appreciate everything that our veterans and active men and women do for us. To sacrifice as they sacrifice is perhaps the greatest gift one person can give another. I also hate that it is asked of them, often for little to no tangible benefit to our country. I have no problem with memorials recognizing them for their sacrifice, at least in the general sense. There is no way any memorial or number of "Thank you's" will ever even scratch the surface of reimbursing them for their work, and sacrifice. 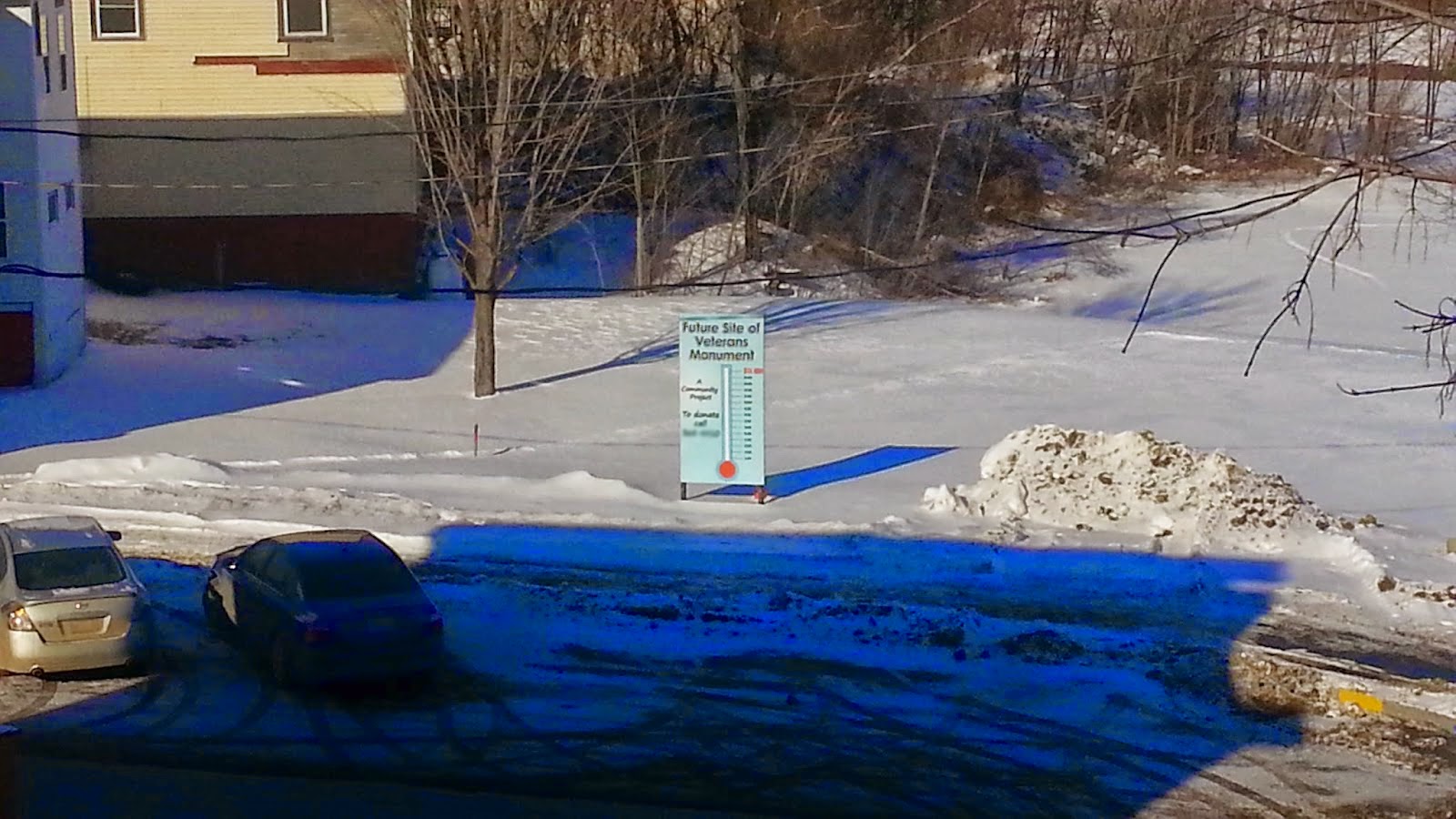 My problems with this specific memorial are-


A: There is a veterans memorial at the mid-point of the bridge that sits not 50 feet to the right of this sign.
B: The memorial is replacing something that (admittedly, in a small way) fostered a sense of community that is sorely lacking in today's age
C: It's replacement of the gazebo is a near-perfect metaphor for an unspoken of, yet near omnipresent issue in this country-that constant war of some sort is necessary, or at least to be expected. It is the "new normal" for us, or at least that is what those that profit from it would want us to believe. Our innocence is slowly but inexorably being replaced with an endless cycle of loss, anger, and the belief that if we question the motives behind a war, that we in some way demean the sacrifice of those that pay the ACTUAL cost of it.

Now, I understand that some of you in conservative circles are not going to want to hear this, but please understand that I hold our nations servicemen and women in the same high regard that you do. They follow orders, and do an impossible job every day for us. They follow orders, many of which they might not agree with, in order to accomplish what they hope will be a greater good. That is honorable. Never think that I would think anything less, because my issue is not with the people that are FOLLOWING orders, my issue is with those that are GIVING the orders.

Meanwhile, our injured service men and women are denied healthcare, or it is made unnecessarily hard to get once they are discharged. Oh, once a big enough outcry accumulates the government requires an inquiry into what happened, and a few token heads at the top roll, but it's never anyone in Congress or in the White House. It never reaches the true top, where trillions are spent on war but only a fraction of a percent is ever spent on supporting those that fought in them. Veterans are celebrated when the cameras are rolling, but treated as cannon fodder when some new group starts rattling sabers during election an election cycle. They deserve better.

As I said above, there is this pervasive sense that constant war has become the "new normal", that from here on out we have no choice but to engage in constant war or be crushed by the rest of the globe. That there is no more "just getting along". No peace, only the unending race to procure a bigger stick than everyone else. It's Type-A warmongering at it's most pure.

We're being conditioned to celebrate war at the expense of peace, at the expense of community. I have this horrific vision of a future where we are left with no public parks or areas free from some reminder of the need for war, some memorial or graveyard. Some of you will say that I am misguided, and perhaps I am. Perhaps the rest of the world really hates us for who we are, and not what we've done. At this point, it's really a "chicken or the egg" dilemma, anyways. We've gone so far that we will never know if where we are now is the product of an attack on us or our allies, or one that we've initiated against a potential but uninitiated threat.

One thing is certain-we no longer let uninitiated threats pass without lighting whatever powderkeg might lie beneath it. We initiate every conflict, either out of strategic advantage or just because some politician doesn't want us to appear weak to the rest of the world. While weakness is the absence of a violent reaction out of fear, strength is the absence of a violent ACTION out of fear. We used to be made of stronger stuff. While our service men and women have always been strong of mind and body, I no longer believe our leaders are.

Wars are started out of ego and desire for profit by those who are least in danger. Gone are the days of leaders actually leading their warriors into battle, where wars were inescapable evils pursued by men and women who paid the cost alongside the rank and file. Now, our politicians push a button, make a phone call, and sit back in their bunkers to wait for the news of how it turned out. They are, in fact, cowards.

I actually went through part of the enlistment process in High School, but was turned away when my neck measurement was too large. Back then, I was in pretty good shape, could take one step, jump,  and hang off the rim of a basketball hoop at 5' 9"-I was not out of shape, and in fact played three sports.

Some person had decreed that I was unfit to join the military by way of a standardized measurement, and I went on to do everything that I have done in the meantime-got married, had a son, got divorced, wrote a couple of books, etc. I often wonder if I would have ended up putting my life on the line for a cause I didn't agree with, had that number on that sheet of paper been a half inch larger. I suppose I would have followed orders like everyone else, and if my otherwise decent luck failed me, perhaps I'd have my name on a wall somewhere. I'm not sure if I'd feel differently about this had I served. But it's a fair question to ask.

I'd like to think that I would still have the vision to prefer gazebos over memorials. To prefer communities over electoral districts. To prefer whole families over broken ones. That might not make the power mongers in Washington rich or powerful, but I have to believe that it would make our country both of those things. I'm not suggesting that the monuments that exist are wrong to exist. Those that have sacrificed deserve to be honored. I'd just prefer that fewer monuments be necessary going forward.

I no longer support the decision to court war with any entity that has not directly attacked us first. Not because I think our service men and women are too weak to follow the orders necessary to defend us, but because our leaders are wrong to give them those orders in the first place.

Let's start rebuilding a country that is worth living in, and not one that is just about picking fights, winning them and erecting monuments to the fallen as propaganda to support the next battle. As proud as they should be of their lost brothers, sisters, mothers and fathers, I'm sure most military families who have lost someone would rather be able to sit next to them in a gazebo than read their name on some monument.
Opinion