August 08, 2013
I've been thinking more and more about writing long term these past few weeks, and I've come to several conclusions.

One, I need to write more. The others? Maybe another time.

I started off by listing the reasons that normally hold me back from turning a 500 word well, at least I made some progress today session into a 5000 word session that leaves me spent like a recent Ebola survivor.

I came to the conclusion that after a long day of sitting at the day job, in front of a computer, I didn't really have the ass-stamina to do it for long stretches at home, even as much as I love writing. 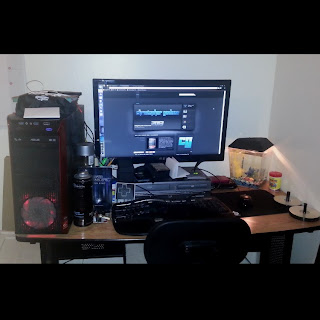 Write on the laptop? Take a look to the left. I love my ergonomic keyboard. I'm not dating at the moment, but if I was, I'd be looking for a woman with curves like that. Don't make it weird, just appreciate it.........and yes, I need to get out more.

I can't type on a laptop. I own one, sure, but it's usually neck deep in Minecraft at the hands of my son. At any rate, if I'm going to become more productive, it can't be on a tiny keyboard. I need my desktop.

The chair? Only part of the problem. sure, I could get a more comfortable chair, but the desk is in such close proximity to my desk that anything larger than the one I currently have leaves it tucked up against the desk so tightly that I can't even turn it to sit down, the armrests hit the surface. Trust me, I tried. I had to get into the seat like Bo Duke getting into the General Lee, and I thought I was going to have to call 911 to get back out. Needless to say, if they use the jaws of life on my desk/chair, I'll end up right where I'm at now-needing a new desk.

I really like this desk, my father gave it to me and it's family at this point. I spoke with my son about possibly using it, and his excuse for not doing so was that his desk was already in his room. He has a firm grasp of the obvious, even at 12-his desk is indeed in his room. I didn't feel like moving it either, it's already setup with his own hand-built desktop computer and it works for him.

So I will hang on to it and use it down the road for something. It will live on, but I need to get back on topic here.

A new desk/chair combo, right. Starting from a clean slate, I began by flipping through the most recent advancements in desk technology. Turns out, they haven't changed a whole lot in the past few years. There were ones made from expensive materials, ones that light up, ones with treadmills built into them, etc. I didn't see anything that really peaked my interest, and the ones I did take a second look at scared me off with ridiculous prices. It's a desk. It holds stuff up. It's not computerized, it's not made out of nano-particles (yet), and I don't need flashing lights or treadmills when I'm trying to concentrate on character development and proper apostrophe placement.

I remembered reading a series of articles a few months back about desks that converted from standing to sitting, and had thought that at the time they sounded pretty cool. They also had scientific reasons for being the way they are, because one week an article came out saying that sitting is worse for you than smoking, then another article came out a few days later stating that standing all day wasn't good for you either, you needed to alternate positions through the day to achieve optimum ergonomics. So all of those people that went out and bought standing-only desks immediately after reading that first article were screwed. I guess that's the price you pay for being an early-adopter, but let's get back to the adjustable desks. They were all electric, making them expensive, and they were all pretty damn plain looking. I wanted something cool, and while this is still America, dammit, I'm going to have a cool desk.

So, I'm going to build my own.

It's going to be simple, convertible, inexpensive, and ultimately, cool as fuck. I want it to be solid, but I've always liked the urban decay/dystopic look, so I decided to make the main structure out of PVC pipe, painted with black vinyl-coat so that it won't scuff off at the first late night First Person Shooter break. Trust me, this is going to be much less ghetto than it sounds. As my father always says, "You will like it when it's done."

I took a look at Lexan for the flat surfaces that would hold my monitor/keyboard/mouse/etc, and immediately realized it was going to be more expensive than I wanted. Those of you who have already "made it" might not sneer at $150 for materials for a new writing desk, but I'm not down for dropping that kind of coin on aesthetics. I'm not going to spend that much on the entire thing, in fact, because then I came up with the next obvious choice-plywood.

I know what you are thinking. Plywood? Why don't you just use cardboard, you hobo?

Hear me out. I'm going to use "high quality" plywood, Maple or something, and prepare it, sand it, and stain it the same shade of red as a rock guitar or Ronald McDonald's hair. The wood grain will show through, and I might even put a few coats of polyurethane on it to make it all "Shiny" (it's a good day when I can work in a firefly reference).

I'm going to be building it all in 3D before I start accumulating parts, and I will be posting updates on here, as well as any updates of note on my writing. I hope to have some compelling news on that front in the coming weeks, but either way, we will both have this project to entertain us. In a couple of days I will show off the completed 3D model, and ask for suggestions as to anything I may have overlooked, or ways I can make it more awesome (that don't involve Lexan).