I understand that it's been a while since I posted, and longer still since I started a blog post without an apology for not posting more often. I have been busy, and there are announcements forthcoming once things get a little more finalized.

I do have one thing to share with you today, however. A while back I had the idea of making two YouTube series. One was to be called "Survive", and the other "Keepsake". I began preliminary work on each, but quickly came to the conclusion that I really didn't have the time for both of them, along with my writing and posting here on this site once every millenia. Video production is the mother of all time sucks. Even worse than writing, trust me when I say this.

"Survive" is not a tale that can be told any other way and still stay true to my vision. The branching storyline just wouldn't work in another form.

The more I thought about it, however, the more I came to realize that "Keepsake" was actually better suited for the comic book/graphic novel medium. Having reduced my videography projects by one, I started to think about what a "Keepsake" project might look like in print.

I've been working on it steadily, and at several points have contemplated starting a Kickstarter campaign for it. I have decided that print and digital copies will be available, and that they will be priced as low as I can price them and still turn a profit. I have alot of faith in this story, I think you guys will really like it as well.

So, without further adieu, here is the tentative cover for the first issue. It is still a work in progress, but the basic layout is accurate. 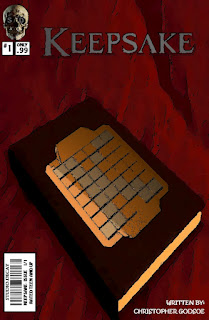 The book features prominently in the storyline, and I decided to play my cards a little close to my vest for now in the way of plot, rather than show too much about what is to come on the cover of the first issue.

Well, that's it for now, but hopefully I will have more to share in the coming days.