It's been forever since I've posted an update.

Truth is, I've been really busy getting COVINOUS out into the wild so that I can focus my attention on to pre://d.o.mai.n.

With COVINOUS nearly out of the final editing process, I've been trying my hand at producing a book trailer that breaks new ground (at least as far as book trailers are concerned).

I've never seen a reason why book trailers cannot be on par with their film counterparts. Sure, many of them are simply static images mixed with off the shelf transitions and on screen text, but that's taking the easy way out. Even big, professional book launches are only now starting to explore the book trailer as an art form.

Luckily, plenty of trails have been blazed by the film industry when it comes to "trailering".

I like to think of book trailers as what the film adaptation of a said book might be. It doesn't require a major outlay of capital to produce a memorable book trailer, and depending on the story, it requires little more than an hour or so extra time with your cover model or stand ins.

Depending on the story, I've come up with different ways of creating the desired effect. Some of them will be CGI, and some of them, will be shot practically.

The first story I ever published was Where I Can't Follow. I decided to film this practically for personal reasons as well as trying to make it as easy as possible. It has still managed to spiral out of control in regards to complexity, but since I've decided to document my work on them, to show you what worked, what didn't, as well as offer any advice I can, here it goes.

Those of you that have read "Where I Can't Follow" are familiar with the scene in which the car is initially crashed. I decided to assemble a plastic 24th scale model of the car, use a small "Bonsai" tree as a stand in for a full size one, and shoot it all to simulate a full size accident.

Below if a "pre-vis", or rough idea of what it might look like. Yes, everything is crude, but this is equal to storyboarding a movie, so I have to ask you to suspend disbelief that the red car is a Thunderbird for a minute or so, lol.


Of course, teh model I made looks a fair bit more realistic than the Jello-O mold looking pre-vis above, but at least you can get an idea of the movement and angles I have planned.

Here's a picture of the nearly finished model and the aforementioned Bonsai tree. 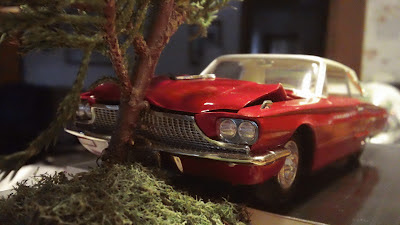 Well, I still have the ground/grass beneath the car. When I get that figured out over the next few days, I'll be sure to post it up here as well.
Until next time!
Book Trailer Covinous Where I Can't Follow