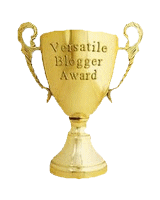 For those that aren't familiar with it (a fair assumption, since up until yesterday, I wasn't), the Versatile Blogger Award is a traveling honor that goes from blogger to blogger via the magic of the internet. It's meant as a way to pay tribute to those bloggers that have entertained you, taught you something, or that you admire for other reasons.

There is no red carpet, there is no nomination ceremony or wild after party held by P. Diddy, but it is a nice gesture to encourage those that you follow.

I've covered a lot of what this blog has meant to me during my Obligatory End of 2011 post, so I won't rehash that all here. I would like to add that it is great when you hear from someone that has been following your writing or reading your blog posts when you had no idea they were doing so. That was the case Monday when Georgina Morales posted that I was one of the five blogs she had chosen to bestow the Versatile Blogger Award upon.

Moreso than the actual award, it was great to hear that she enjoyed what I had to say. It truly makes it worth all the nights writing new posts or checking in on your website traffic to see plenty of hits, but little idea who those people might be. So in closing, I would like to thank Georgina again and ask everyone to give her a shout at http://diaryofawriterinprogress.blogspot.com/ . Now, on to fulfilling my responsibilities for receiving the award. They were told to me exactly as follows (seriously, I copy and pasted, lol)

Thank and link to the blogger who bestowed the award.
Share seven random facts about yourself.
Spread the love by passing the award to five other bloggers.

So.....Seven random facts about me.

Alright, time to disclose my 5 recipients.

Well, I believe that covers it! Thanks again to Georgina Morales at diaryofawriterinprogress.blogspot.com for thinking of me for this award. Alright everyone, have a great evening (or morning if you are reading this in the AM).
book reviews contest process tips writing