Why Speculative Fiction authors are always in a hurry.... 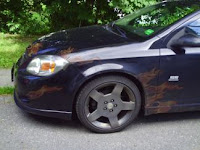 A large part of what I am about to write below is a warning to my Speculative or Science Fiction writing brethren. It's not an attempt to cast blame, and certainly not an attempt to whine. It is merely an attempt to encourage writers to not procrastinate if their stories are contingent upon near-future technologies.


Unless this is your first visit to this site, (or you've not been paying attention, lol), you will undoubtedly know that I am currently at work on a rather large SciFi/Speculative Fiction series titled "d.o.mai.n", the first book of which is due to come out next year.


I have envisioned alot of new technology to be included in these books, spent alot of time trying to decide where technological trends will go in the 20 years seperating today to the setting of the novels. I will probably be wrong on much of it, overshooting on some advancements and not being ambitious enough on others.


Such is the nature of Spec. Fiction.


When you base alot of your ideas on fields or products that are just now at their infancy, you are in essence engaging in a footrace with the scientists tasked with bringing those ideas to market. If you procrastinate as I have, sometimes the scientists catch up to your vision.


In the chronology of my writing of d.o.mai.n, the second book was initially started a decade ago. It began as a screenplay, as with the advent of Blender and other special effects software, I fancied myself a filmmaker. One of the effects I had envisioned (though I doubt I was the first to come up with the idea) was of a car where every exterior and hard interior body panel was constructed of LCD, essentially making the car one giant television.


This was one of the first scenes I wrote, and I am pasting a short excerpt below in the hopes that you all forget you saw it in time for the publishing of the second book in the series, lol.


(Note: I did revise this passage pretty heavily. I did learn something while revising it though-If you want to see how far you have come in a specific discipline, all you have to do is take a look at the quality of work you produced ten years ago)

He was betting that his talent exceeded Kellen's by a far margin, and with the assistance of modern stability controls, he understood his chances were better than fair that plan would work.
In his rear view mirror he watched with barely restrained enthusiasm as the Mustang erupted from the smoke cloud, skipped off the curb and careened across the ninth hole of the adjoining golf course.
Kellen did his best to stop the machine, but the pent up momentum sent him sliding over the green, tearing four large swaths into the fragile surface before depositing it into one of the large greenside bunkers.
Theo chuckled to himself as he rejected Kellen's incoming call, having a fairly good understanding of what he would hear. He wondered what Kellen's story would be for the police, but it had better be good. He knew the owner of the golf course well, and he was no fan of Kellen's.
A second call illuminated his display. He accepted it with a glance.
"Theo, care to tell me what's going on?"
Kincaids voice rang in his ears, clearly annoyed.
"Kellen followed me from Victoria's, tried to drive me off the road."
Kincaid went silent. Theo knew his friend well enough to know that he had given him every bit of information he would need to reverse engineer what had happened.
When Kincaid spoke, his voice carried a tone of bemused acceptance.
"I guess we're playing the back nine until the grounds crew can get it grown back. Maybe I should have told the designer to locate a pond there."
-End of Excerpt
The technology that I am referring to is the animated LCD panels on Kellen's car. Of course, Theo has these on his car as well, but as he is inside during the entire chase, they are outside of his field of vision and as such not worthy of note in this scene.
A few days ago, I came across this video, a concept animation by Toyota, showing much the same technology. It is the first implementation (although in a purely CG sense) of what I had envisioned ten years ago. In other chapters I outline the augmented reality windshields, but I had envisioned them as a clear overlay that would still allow for traditional vision through the glass.
(In order to regain my geek honor, I decided to include these ideas in my current project. I may have done it even if I hadn't seen this video, but after seeing it I had no choice. If design committee's at Toyota were thinking along these lines, I needed to stop procrastinating and get my thoughts down on screen as soon as possible.


The more I thought about it, the more I realized that this is the case for all Sci-Fi writers, unless you are writing stuff so far out there that you can procrastinate all of your life and still be early by a few thousand years.


So in closing, don't procrastinate. Don't rush out sub-standard work, as everything you do will be a permanent exhibit with your name attached (ask all of the actresses and actors that do nude scenes early in their careers, no one loses that footage, EVER).


PS-Yes, I realize that the picture I photoshopped is not of a Mustang, past, present, or future. But copyright laws the litigious lawyer-fest that they are, I decided to mock up an image using a shot of MY car, since I presumably own the rights to the picture I took with my camera in my yard with my car. Not sure if that will hold up in court though, so don't tell anyone, ok?
concept D4RK R3QU13M Kellen Malachai Miles Torvalds predomain process progress Roger Kincaid SideARM Theo Atkins writing