Throwing in the NaNoWriMo towel...... 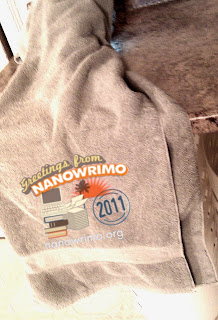 Yes, what you see to your left is the official NaNoWriMo towel.
(Actually, it's not, I just photoshopped it, lol)

I'm throwing it in.

I came to the realization that the 50k a month writing marathon was hurting my book more than it was helping it. Not because I wasn't making progress, but because I found myself pushing out content that I KNEW to be crap.

Seriously. Every sentence in the last chapter I have written is leaving a bad taste in my mouth. I wrote an entire action scene that is superfluous to the plot. When I finally decided that I needed to tie it back in later, I realized that it would take too long. I took a dare to write the dialog of an entire character using movie quotes from the collected works of a single actor.

It killed three days. Have you ever tried writing three separate conversations using movie lines, and have it flow naturally? As I was writing it, I found myself thinking, "this fucking sucks". And you know what, somethings wrong if I'M saying that as I'm writing it.

So, I've decided for the betterment of my novel I am going to slow down and concentrate more on writing this novel in a way that I can be happy with.

WriMo's, please don't take this as an attack on NaNoWriMo. it's not at all. There are plenty of people that this schedule, or event, brings out the best in. I just happen to not be one of them.

I produce alot better work when I give myself time to think things through for a few days, then sit down and bang out 7000 words. Sure, I can do that for NaNoWriMo, but the problem is that I needed to change a few things in my outline, because my story reached a point where I was writing to fill space until I filled enough words to get to the events that would drive the final three-quarters of the novel.

My novel d.o.mai.n is outlined to be around seventy thousand words in length. Which posed another dilemma-how can I "win" NaNoWriMo with an unfinished book? If I hit 50k, I'm really only 2/3rds of the way done.

Hence, the character speaking in only quotes from Jack Nicholson movies. (Yes, "You Can't Handle the Truth!" is in there......sigh.

So I am going to tweak that chapter, and finish the next, and see if I can produce the kick-ass book that I know I can write before the first of the year.

Because if you haven't heard me say it yet, 2012 is my year. I decided that it would be good to get in one more good year before the world all goes to hell just before next Christmas, so I'm picking 2012.

And this book is my first Salvo.

PS-Thanks for checking out my blog. I appear to have developed a rather large following in Russia between posts, or at least d.o.mai.n-Book 1 has, so I would like to say hello to all of my peeps from Russia, the Ukraine, and Latvia!

If this continues, I may need to look into translating d.o.mai.n for export!
Miles Torvalds NaNoWriMo predomain process SideARM writing