November 04, 2011
Wow......I decided to take a look at my stats tonight before I sat down again to write and realized that I've been sorely neglecting this site. I've decided to post part of what I wrote this Wednesday night, for fun of course since this is being written at a breakneck pace for NaNoWriMo (9540 words so far ;-), so try not to judge the clumsy wording TOO hard, lol.

To preface this scene, Miles has jumped on the bus, entirely on a whim, and runs into a person from his past. Let me know what you think, as I've said I realize that this is pretty rough but I thought a few of you might enjoy getting a sneak peek at what I've been working on. 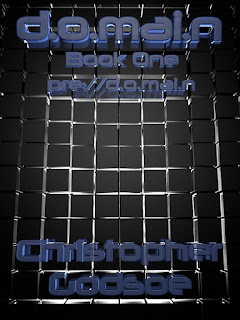 
Miles didn't consider his urges as fate, exactly, just that nature and society at large often settle into subtle patterns, and he had found that if he allowed those imperceptible patterns to guide him, invariably good things happened.

As he settled into his seat and the large mag-ride tires lifted into position, for the first time he allowed himself to feel sorry for his mother. He felt as though he had let her down, sure, but more importantly he felt that she had been robbed of a life worth living. Robbed, by the greed of the insurance companies that had taken that from him..... from her.

Of course, companies are run by people. They may be assisted by computerized intelligences, but humans were still required to make the unlitmate decisions when it came to coverage. That meant that someone, a real flesh and blood person, had chosen money over his mothers life.

His fingers curled into tight fists, which he managed to resist thrusting into the padded back of the seat in front of him out of sheer will.

The entire thing was criminally unfair.

“Miles? Miles is that you?”, a sweet, vaguely familiar voice found the crack in his all consuming hatred and brought him back to reality.

It wasn't the voice that had been vague at all, Miles understood, it had been reality itself.

The voice was the very familiar voice of his girlfriend Gemma Beck.

Correction. X-Girlfriend. He had ended things around a year ago, shortly after his mother had fallen ill. He had refused to tell Gin exactly why he had become so distant, why he never felt up to hanging out, and she had taken it as a fault that he had found with her.

Of course, she had plenty of faults, if he had cared to deem them important. Everyone does.

With Gem, they ranged from her hangups regarding personal hygiene to her extreme paranoia regarding getting pregnant. With her tattoos, piercings, and brightly colored hair she had appeared to be a fun girl to get into bed. Miles soon found out that what he thought was a common feminine need to avoid filth was in fact a deep seated dysfunction that turned even the most spontaneous of lovemaking sessions into science experiments. With all of the spermicidal creams, gels, diaphragms, condoms, and assorted other safety equipment, Miles wasn't sure, even after sleeping together at least a dozen times if he had ever actually touched her longer than at that moment.

The more he thought about it, the stranger her hand felt in his.

As he was brought back to the present, he realized she had been talking to him for several minutes. She had come to a natural stopping point in her monologue and was looking at him expectantly for a response. She squeezed his hand gently, prodding him to say something to end the awkward silence. Miles glanced around, and several adjacent passengers seemed to have keyed in on the fact that he had been rudely ignoring her..

“Sorry, I've had a lot on my mind” was all he could manage.

She tightened her smile uncomfortably and offered, “I know. That's what I was saying. I'm sorry, I heard about your mother.”

“Yeah, we're trying to get her surgery scheduled now, but everything is so booked up.” He lied.

He had never lied to her when they were together, and perhaps that was their demise. Sometimes, an appropriateness filter was necessary.

“Wow, I guess I never realized how shitty a liar you are.”

Miles could only nod slightly as he found something less judgmental to look at.

“Sorry, I didn't mean that. I promised myself that if I ever saw you again I would apologize for the way I acted. I didn't really give you a chance to explain what was going on, why you pulled away. I was insecure, and I guess more than a little scared.”

He was caught in the middle of a dilemma. He wanted to accept her apology, but wanted to be careful to not take it too casually or quickly.

He was still in no position to date, and wanted to make sure that she didn't read too much into his body language.

A sharp object pressed against his finger, and he looked down at the hand Gemma was holding. He spotted the diamond ring on her third finger, and laughed.

“I was wondering how long it was going to take you to notice that”, Gemma said brightly.

“When?” was all he could manage. He was more than a bit surprised that she had moved on so completely in a years time.

Miles realized just then how much can change in a year, and how a year spent focusing on a solitary task could make time so irrelevant.

“A few months ago. We're getting married in the fall. He's a great guy, you'd like him”

Miles didn't know how to feel. He had no compelling evidence to disagree with what she had said, so he simply smiled and nodded respectfully.

He marshaled every ounce of happiness left in him from the last year and said, “I'm happy for you”.

Her radiant smile told him that she had bought this, the more convincing of his two lies in the past few minutes.
Miles Torvalds NaNoWriMo predomain progress SideARM writing