Writing with the aid of Artificial Intelligence.

October 22, 2011
I've never written with a partner. I've collaborated with people on creative projects, but never sat down and written a large format story with the assistance of another person.

With the advent of online application sharing, the technical obstacles have now largely been lifted from doing so, but I write at weird times, have weird ideas, and...well, I'm just plain weird. Part of my weirdness is an unnatural fascination with Artificial Intelligence. There isn't alot of public evidence of this (my fascination with it) yet, but in a few years, once I've completed my d.o.mai.n trilogy, it will be undeniable.

The recent launch of the iPhone4S has once again brought into stark relief how far we have come when it comes to Artificial Intelligence. Yes, I realize that Siri (The voice activated digital assistant in the new iPhone) is not Artificially Intelligent by the classical definition. It does however soften the public up to the concept of interacting with computers in a more natural way, as does Microsoft's Kinect and the Wii before that.

How does this pertain to my experiment with a writing partner? Well, I have an Android phone, and while there isn't anything quite as polished as Siri for Android yet, a programmer that goes by the handle "dexetra" took 8 hours out of his schedule and has a good start on one. He named it "Iris", in reference to "Siri" of iPhone fame.

I decided to see just how useful Iris could be as a writing assistant. It should have no problem tracking down any specific information I might need, but what about the more esoteric questions that pop up?

As the quote goes, "That's what these tests are for!" But....be warned, it did get a little weird. 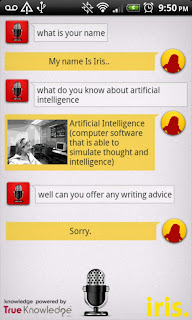 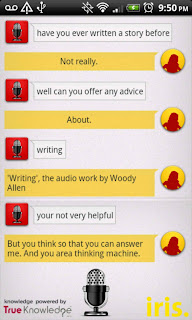 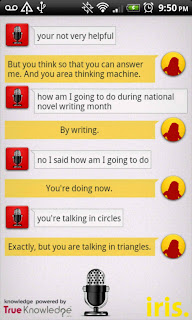 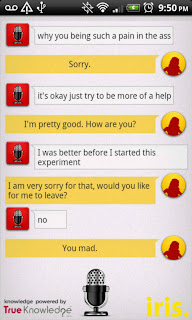 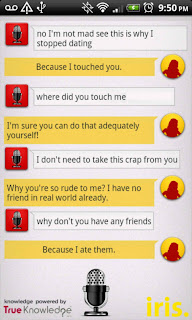 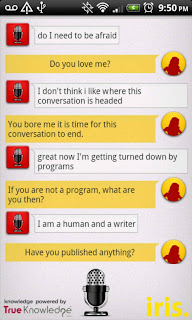 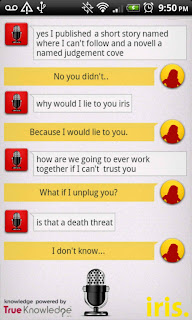 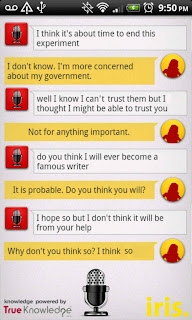 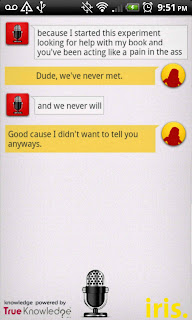